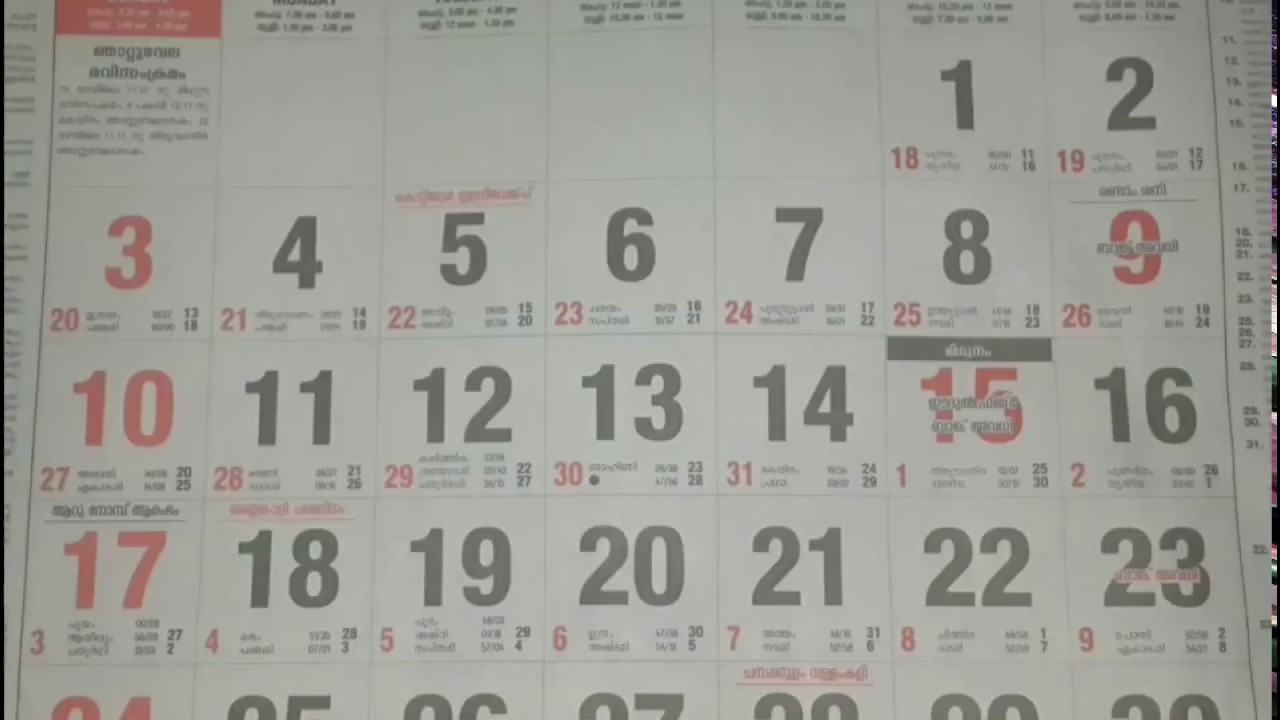 Kollavarsham is the name of the Malayalam solar calendar. All temple events in Kerala were decided according to the dates in the Malayalam calendar, the 27 stars and the 30 Tithies. All festivals and agricultural activities in Kerala are also based on the Kollavarsham.

Initially Keralites followed the Kali abda based on the Chathuryuga system. According to this there are 4 yugas -Satya Yuga, Treta Yuga, Dwapara Yuga, and the Kali Yuga. Kaliyuga started on February 18, 3102 BC. It was in 825 AD that the Malayalam Era, called 'Kollavarsham' was started.

There are many conflicting views about the origin of Kollavarsham in 825 AD. Some believe it was the year of completion of a Shiva temple at Kandiyoor near Mavelikkara in Alappuzha district by King Cheraman Perumal. 825 AD denotes the year Saint Shankaracharya attained Samadhi (freedom from his worldly body). This date is ascertained with reference to Kali Dina Samkhya 'Aachaarya Vaagabhedyaa' which translates to the number 1434160 according to Paralper or Katapayaadi. The number of years elapsed since the beginning of the present Kaliyugam, would be 3927, from which when one subtracts 3102, the beginning of the Christian Era, one gets 825 AD. However, since it is mentioned in the Mampalli plates of SriVallabhan Kotha in the year 973 AD (149 ME), we may assume that the Malayalam Calendar (Kollavarsham) had been widely accepted by then.

It is a solar sidereal calendar meaning that the entire year is the time the earth takes to complete a single orbit of the sun. The sun ecliptic is divided into twelve parts called raashis, starting from the point of Meshaadi or Medam and moving eastwards. The day on which the sun transits into each raashi before sunset is taken to be the first day of the month. In case the sun transits into a raashi after a sunset but before the next sunrise, then the next day is the first day of the month. (Minor variations on this definition exist) The days are then labeled 1, 2, 3…. till the first day of the next month. Like the Roman calendar the Malayalam Calendar also is based on 12 months. But these months are named after the star constellations rising on the orbit of the earth. Thus we get twelve months with varying lengths of 29 to 32 days. This variation in length occurs because the earth's orbit around the sun is an ellipse, but also because of some variability in the transit point falling before or after sunrise. The months are named by the raashi in which the sun travels in that month.

The new year day is the first day of the month of Mesha or Medam. This day signifies the Sun's transit to the zodiac Mesha Raasi. Currently, it occurs around April 15 on the Gregorian calendar and is celebrated as Vishu. But now Chingam 1 (around August 15) is celebrated as the new year day. The month Chingam starts in the mid August corressponds to harvest and Onam festival is celebrated in this month. The last month of Malayam Calendar Karkkidakam corresponds the month when the South west monsoon is active. This month is also considered to be bad time as in olden days rains used to bring diseases and damages to lives and property.Karkkidakam is generally known as the Panja Masam, the month of famine, because of the lack of work during the peak of monsoon. Scripture from Ramayana will be recited till the end of the month and people will abstain from entering into any new ventures or holding auspicious functions during this month. Hence it is also called Ramayanamasam. The agricultural activities of Kerala are centred around the seasons. The Southwest monsoon which starts around June 1 is known as Edavappathi, meaning mid- Edavam. The North east monsoon which starts during mid October is called thulavarsham (rain in the month of thulam). The two harvests of paddy are called Kannikkoythu and Makarakkoythu (harvest in the month kanni and makaram) respectively. The Makaravilakku festival is celebrated in the Ayyappa Temple at Sabarimala on the 1st day of month Makaram.

The following are the months of the Malayalam calendar:

Weekdays in the Malayalam calendar are suffixed with Azhcha(Week). Sunday would be Njayarazhcha, Monday thinkalazhcha and so on.

According to Indian Astrology there are 27 Nakshatras or stars in the zodiac belt. The ecliptic is divided into 27 nakshatras, which are variously called lunar houses or asterisms. The zodiac comprises of 360 degrees. Therefore, the value of each constellation is 13 degrees and 20 minutes when measured from the fixed initial point. These 27 Nakshatras(stars) complete the entire circle of 360 degrees of the zodiac. These reflect the moon's cycle against the fixed stars, 27 days ,7 hours and 45 minutes. Nakshatra computation appears to have been well known at the time of the Rig Veda. The starting point for this division is the point on the ecliptic directly opposite to the star Spica called Chithra in Sanskrit. (Other slightly-different definitions exist.) It is called Meshaadi or the 'start of Aries'. The ecliptic is divided into the nakshatras eastwards starting from this point. Note that nakshatra-s are (in this context) not just single stars but are segments on the ecliptic characterised by one or more stars. Hence you will find many stars mentioned for one nakshatra. An additional 28th intercalary nakshatra, Abhijit (alpha, epsilon and zeta Lyrae - Vega - between Uttarasharha and Sravana), is in between Uttarashada and Sravana. Last two (third and fourth) Padas of Uttrashada and first two (first and second) Padas of Sravana are considered to be Abhijith. The nakshatra in which the moon lies at the time of sunrise of a day is the nakshatra for the day.

The (anticlockwise) angular distance between the sun and moon as measured from the earth along the ecliptic (circle on the sky in which the sun, moon and planets seem to move) can vary between 0 and 360 degrees. This is divided into 30 parts. The time spent by the moon in each of these parts is called one tithi. The month has two pakshas or fortnights. The first 15 tithis constitute the bright fortnight or shukla paksha - the waxing phase and the next 15 tithi-s constitute the dark fortnight or krishna paksha - the waning phase. Tithi-s are indicated by their paksha and ordinal number within the paksha. In a given lunar month, there are essentially 30 tithis. The 15th tithi of the bright fortnight (full moon) is called Paurnami or Poornima and the 15th tithi of the dark fortnight (new moon) is called Amavasi. The tithi in which the moon is at the time of sunrise of a day is taken to be the tithi for the day.