Around 6,800 BDP, the great Amani Empire was forced to retreat from their territories in the land which would later be known as Quel'Thalas when the high elves under Dath'Remar Sunstrider established Silvermoon City atop sacred forest troll ruins. For 4,800 years, the Amani tribe remained within their temple city of Zul'Aman, unable to provide a further challenge to the magic-wielding high elves.[1] Throughout the millennia, the Amani planned their revenge, but they lacked a strong central leader to unify them. Infighting among the Amani trolls was commonplace until 2,800 BDP when troll emissaries from the Zandalar tribe arrived in Zul'Aman. Holding an unofficial position of leadership over all trolls, the Zandalari helped the Amani coordinate a plan to revitalize the fallen Amani Empire, starting with the destruction of Quel'Thalas.

Chichilarue of Knights of Irony on Uldum sends in this shot of the Troll temple of Jintha'Alor nestled in the mountainous Hinterlands. If you've never had the pleasure of visiting Jintha'Alor. Fortunately, the layout for the cave at the top of Jintha’alor is the same as the kobold cave in Arathi Highlands, which I had just been questing in with an alt, so I knew which route was a dead end. We fought our way quickly into the cave, spotting the egg about where I expected it.

The visiting Zandalari emissaries took notice of Jintha, who they dubbed a 'fearless' warrior. The Zandalari sought to conclude the Amani issue of leadership; therefore, they appointed Jintha to serve as the Amani warlord (or emperor). Immediately upon his ascension, Jintha dispatched warbands into Quel'Thalas, testing the elven defenses. When all signs indicated he was in the stronger position, Jintha started the Troll Wars by invading Quel'Thalas, utilizing the art of voodoo magic taught to them by the Zandalari and a host of loa allies to invigorate the Amani warriors with their presence.[2]

As the war drove on his armies neared Silvermoon, Jintha was diverted by a sudden and surprise attack by an army of 20,000 humans from Arathor under the command of King Thoradin. Jintha immediately underestimated the potential of the human warriors because he considered them an annoyance more than a threat. Unknown to Jintha, Thoradin had laid a trap, counting on the hubris of the forest trolls. True to Thoradin's assumptions, Jintha had his army turn from Silvermoon to pursue the human army, thinking them an easy target. Thoradin then directed his army to began retreating to their distant bastion of Alterac Fortress. Jintha continued after them, with the high elven army picking away at his rearguard.

On the slopes of the Alterac Mountains, the Arathi army wheeled around and charged the forest trolls, despite being vastly outnumbered. Jintha did not know Thoradin had the elves secretly train one hundred humans their secret arcane arts. Jintha and thousands of his army were incinerated from inside out when the human and elf sorcerers cast a terrifying firestorm from the heavens to the earth. The death of Jintha destroyed the unity of the army and the forest trolls fled, ending the Battle of the Alterac Mountains and the Troll Wars.[3]

Jintha'Alor (or Jintha'alor) is the capital city of the Vilebranch tribe located in the Hinterlands. Jintha'Alor was built by the trolls of the Amani Empire, it is the second largest city of the forest trolls, second only to Zul'Aman. The leaders of Jintha'Alor were Vile Priestess Hexx and Hitah'ya the Keeper. Rumors exist of an ancient egg of Hakkar the Soulflayer residing in the city.[1] It is named for the great Amani warrior Jintha.

The Totem of Akil'darah can be found here.

The Horde now have a very small encampment at the base of the ruins. Further up in second-to-last tier is a pit that holds a large, roped down troll. The top cave now is filled with spiders, while the exterior area is filled with sacrificed Vilebranch trolls. In addition, the area where the bird cage used to be there are now three Wildhammer clan dwarves.[2]

The Jintha'Alor ruins are a troll archaeologydig site. For [Survey] purposes, they are broken up into the Upper City Digsite, consisting of the uppermost two tiers, and the Lower City Digsite, covering the rest of the ruins. 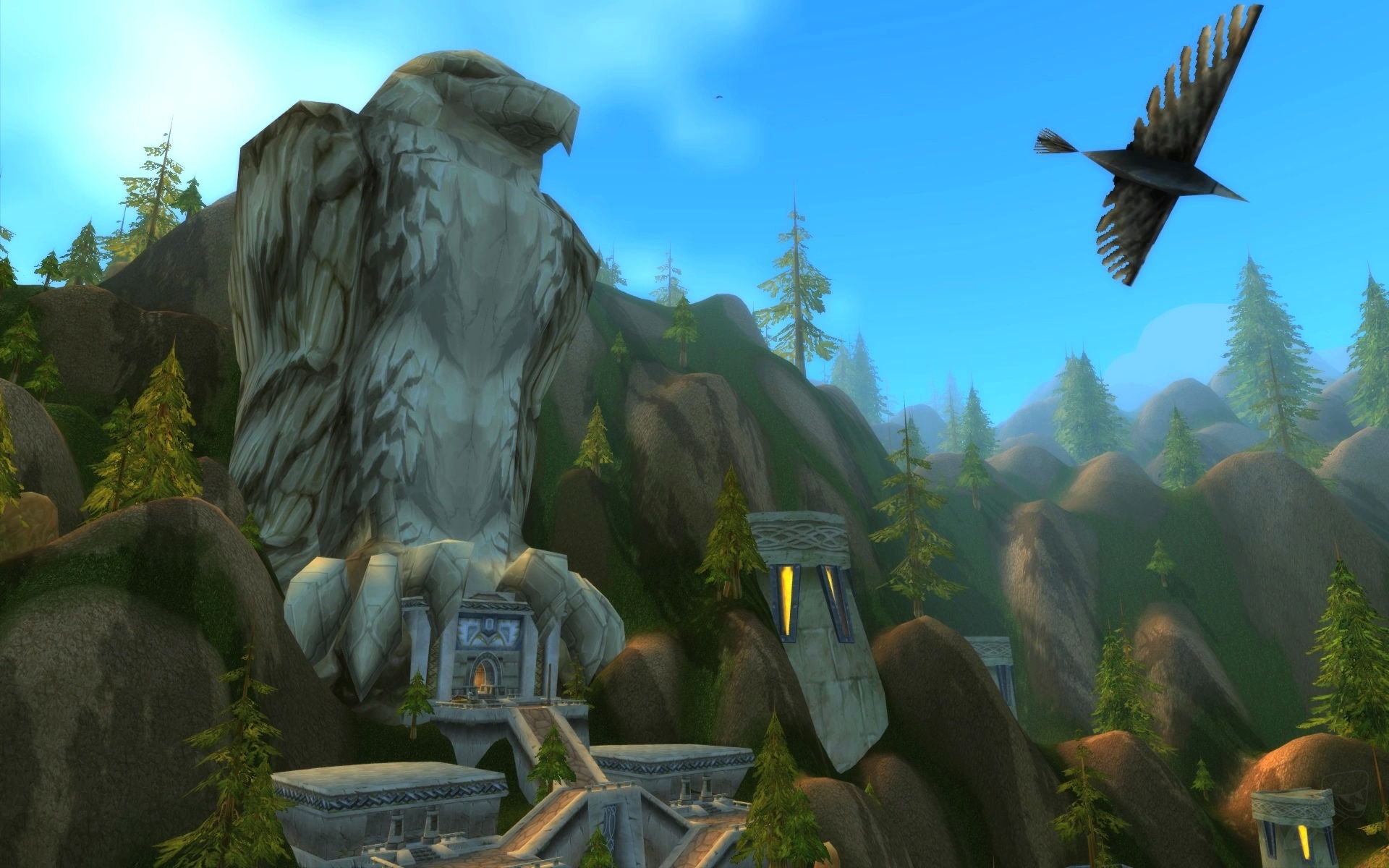 This section contains information from the Warcraft RPG which is considered non-canon.

The Vilebranch trolls call this settlement home. Several smaller troll enclaves are scattered throughout the Hinterlands.[3]