Lawrence is best known for his comic stripsThe Rise and Fall of the Trigan Empire in the British weeklies Ranger and Look and Learn, and the Storm series, first published in the Dutch weekly Eppo (later relaunched as Sjors & Sjimmie) and subsequently in album form. Famous for his realistic and detailed style, he was an inspiration for later UK comic-book artists such as Brian Bolland, Dave Gibbons and Chris Weston[1] (indeed, Weston was taught by Lawrence), and influenced Indonesian artist Apri Kusbiantoro.[2]

Born in East Sheen, a suburb of London, Lawrence was educated at St. Paul's School, Hammersmith. After joining the Army for his National Service, Lawrence used his gratuity to study art at Borough Polytechnic Institute (now the London South Bank University) but failed his final exams. Shortly before, a former student had visited the school to show students the work he was doing as a letterer on comic strips. Lawrence was inspired to take some samples to an editor at Amalgamated Press who suggested he try showing them to Mick Anglo, who ran a studio packaging comic strips for a London publisher and magazine distributor, Len Miller.[citation needed]

Lawrence worked for Anglo for four years, drawing the adventures of superheroMarvelman and various Westerncomic strips. After an argument with Anglo over pay rates, he found work with Odhams Press, drawing Wells Fargo for Zip, and with the Amalgamated Press (now renamed Fleetway Publications), contributing episodes of Billy the Kid to the comic Sun. When the ailing Sun merged with Lion, Lawrence switched to swashbuckling historical strips, Olac the Gladiator, Karl the Viking and Maroc the Mighty (written by Michael Moorcock).[3]

A colour strip produced for Lion Annual 1965 ('Karl the Viking and the Tideless Sea') led to Lawrence being offered colour work in Bible Story magazine and the sprawling science fantasyThe Rise and Fall of the Trigan Empire which debuted in Ranger in 1965. Lawrence was to draw the strip in the pages of Ranger and Look and Learn until 1976.[citation needed]

In 1976 Lawrence attended the London comic book convention called Comics 101, the first convention dedicated to British comic book creators. There he learned that The Trigan Empire was syndicated all over Europe. When his publisher refused to give him any form of royalties or compensation, he departed from his old employer and was immediately offered work on a new Dutch comic magazine called Eppo.[4] After an abortive start on a strip entitled Commander Grek written by his friend Vince Wernham, Lawrence found success with Storm. The first volume, The Deep World, was based on a concept by Martin Lodewijk but written by Philip Dunn. A further 22 volumes followed.

Lawrence did not limit himself solely to Trigan Empire and Storm; other strips he drew include Fireball XL5 and The Adventures of Tarzan for TV Century 21, Carrie for the men's magazineMayfair and a number of one-off strips for various Dutch publishers.[citation needed]

A number of partly completed and unpublished comic strips appeared in the series Don Lawrence Collection, published in the Netherlands. The final Storm serial (completed by Lawrence's former assistant Liam Sharp) appeared in the magazine Pandarve published by the Don Lawrence Fanclub in 1999–2001. One of his last illustrations was the cover of volume 6 of the Storm -the collection- from 2002.[citation needed]

In the mid 1980s he was looking for an assistant and accepted then 17-years old Liam Sharp as his apprentice, but after realizing he did not want to step back as much as he had thought he would, he helped Sharp develop his own style.[5]

In 1995, he lost sight of his right eye, caused by an infection after an unsuccessful cataract operation. With his depth perception gone, he could no longer see when the tip of his pen and brush touched the paper's surface, forcing him to teach himself an alternative drawing technique.[6]

He went through a new cataract operation in 1999, this time without medical complications. But his general health was starting to decline, and when he was diagnosed with emphysema and put on medication, he permanently retired from comics and art.[7]

Medal of the Knight of the Order of Orange-Nassau

Comics work published in English include:

Storm is a soft science fiction/fantasycomic book series originally (and for most albums) drawn by Don Lawrence. It tells the adventures of an astronaut who accidentally gets lost in time. The series originated in Dutch, but has since been translated into many other languages.

The storyline was originally conceived as a framework for stories in the 'Deep World' revolving around the character Commander Grek. An episode (in which Commander Grek turns into a fish man) was written in 1976 by Vince Wernham and drawn by Don Lawrence, but it was not picked up by Dutch publisher Oberon. The story was later reworked by Philip 'Saul' Dunn, now with the astronaut Storm as the main character. This version did get published by Oberon, serialized in the comics magazine Eppo in 1977. (In 1984, with the Storm series established as a success, the previously unreleased Commander Grek album was published as 'Episode 0' of the series. The album includes background information regarding the inception of Commander Grek and Storm.)

Storm originated in Dutch, although all the books are translated into English and German, and some in at least twelve other languages (publishers in those languages include Oberon, Interpresse, Quality Communications, Glénat, and Norma Editorial). English translations are published in the Don Lawrence collection.

The Living Planet and The Slayer of Eriban were also published in Heavy Metal magazine in January 1997 and March 1999. The Navel of the Double God (2007) had an early publication in the Dutch magazine Myx.[1]

The Chronicles of the Deep World[edit]

Storm is an astronaut in the 21st century who makes a journey to the Great Red Spot of Jupiter. The Great Red Spot is an anticyclonic storm which has already been there for at least 300 years. Once arrived, his ship gets dragged into the storm. When Storm manages to escape, it seems he has traveled through time. The civilizations on Earth have collapsed and turned into a barbaric society. This is where the adventures of Storm begin.

Apart from albums 4, 5 and 6, each album is a separate adventure.

Storm and Ember get beamed to the Pandarve multiverse, where they meet Nomad, and a new enemy: Marduk, the Theocrat of Pandarve. Marduk wants to catch Storm, because Storm is an anomaly (he imbalances the multiverse because he traveled through time) and is the key to give him power over the multiverse. The Pandarve multiverse is a bubble of breathable gas surrounding a white hole that contains Pandarve itself, and thousands of other planetary objects. The main body, Pandarve, is a giant telluric planet. At Pandarve, the normal physical laws are no longer valid; this gives Don and Martin room for incredible stories and magnificent scenery.Also, Pandarve is a living planet - which means it has intellect and can even interact with other beings. For this interaction she normally relies on her Theocrat, but she is also capable of creating a humanlike representation of herself [Alice].Storm's time travel remains important, but Ember has also travelled through time. So she is (or should be) an anomaly as well (In the Legend of Yggdrasil, they both arrive in a certain time period together). This fact is never really used in the stories.

Other planets and planetoids in the Pandarve multiverse described in the chronicles are:

The last three albums (The Von Neumann Machine, The Genesis Equation and The Armageddon Traveller) form a trilogy wherein Storm & co and Marduk need to work together to save Pandarve from perdition. A strange, gigantic 'spaceship' (referred to as the Intruder) is headed for a collision with Pandarve, which will mean the end of both entities. The 'spaceship' consists of various 'cocoons'. Some time around the 21st century, one 'cocoon' was sent into space with the purpose of making replicas of itself. But because of a system error, the strangest 'cocoons' started to emerge (including one resembling Heaven and one the Hell from La Divina Commedia) and cluttered together instead of floating off. There are some references to well-known stories (Alice in Wonderland, Hänsel und Gretel, Sherlock Holmes, ..), movies (My Little Chickadee and other Western influences), celebrity actors(Marlene Dietrich and Marilyn Monroe, ..) and some mathematical theorems (the Genesis Formula, Goldbach's Conjecture and Fermat's last theorem).

About the time when The Genesis Equation was published, a spin-off series was started, called Chronicles of Meanwhile. The episodes take place between albums 6 and 7 of The Chronicles of the Deep World. Three episodes were released, drawn by Dick Matena, the first two under his pseudonym John Kelly.

Three years after Don Lawrence died, a new team continued his work. Martin Lodewijk maintained the writer role, while Romano Molenaar and Jorg De Vos were selected as artists.[2] Their first album The Navel of the Double God (De Navel van de Dubbele God) has been available since September 6, 2007 in Dutch. Storm 23 has already been reprinted and has given Storm a renewed international interest. The next album, titled Marduk's Springs, was released in February 2009.[3]

Since July 2008 there has been a second team working on Storm: Minck Oosterveer as artist and Willem Ritstier as writer. Their first and only album was called The Exile of Thoem.[4]. The series was put on hold after Oosterveer died in a motorcycle-accident in 2011.

In 2014 Ember was given her own series chronicling the days before she met Storm.

The Chronicles of the Deep World[edit] 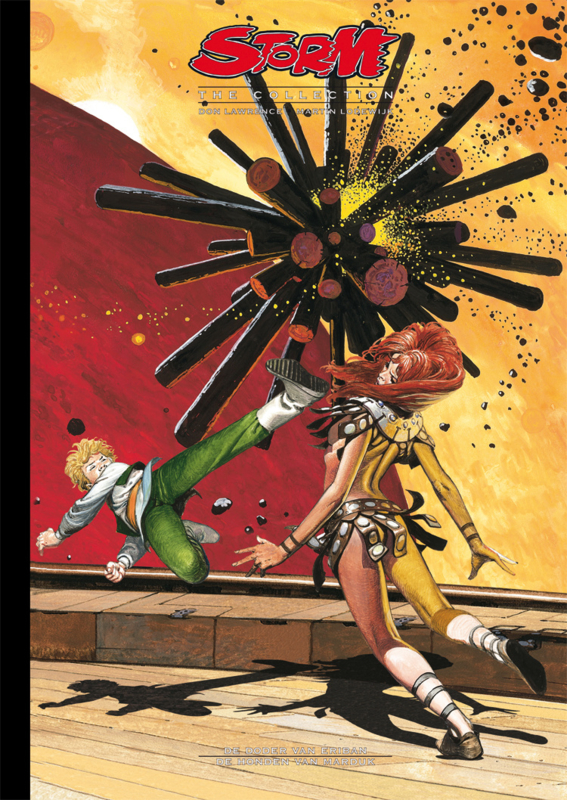 Chronicles of the Outer Rim[edit]

The Deluxe volumes are hardback with a leather cover, gold imprint and dust jacket. Each bundle contains two albums and a part of the Storm-dossier 'The Search for Storm'. The last part also contains 'Storm - The Big Picture' which gives an overview of Storm in the press, Storm expositions, the status of Storm in the modern comic scene and a portfolio. Only available in Dutch and English. 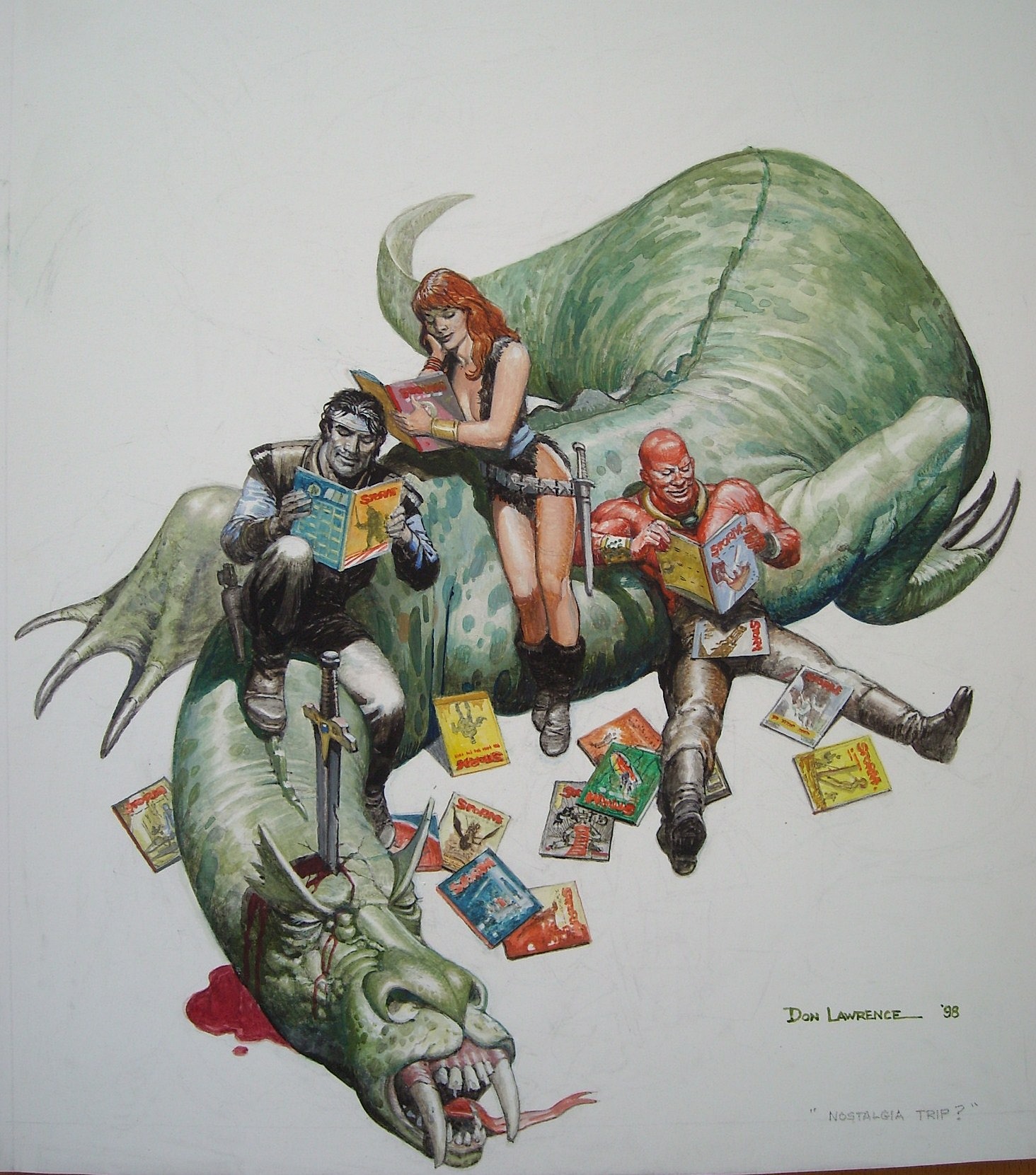